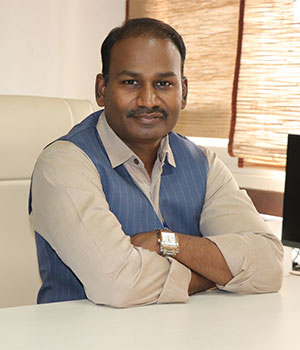 Shri. M Nagarajan is an IAS Officer of 2009 Batch, Gujarat Cadre. Currently he is working as the Commissioner Higher Education, Gujarat state.

He has a working experience of 22 years in various government departments including Indian Railways, Indian Audit and Accounts Department and Reserve Bank of India (RBI) and in the Indian Administrative Service(IAS).

He worked as District Collector in Arvalli District Gujarat. He contributed in bringing services delivery and industrial development of this tribal area. Later he was the District Collector of Kutch District, which is India’s largest district in terms of area, and is a very strategic location for India’s defence.

Prior to that, he was leading the Surat Smartcity Mission as CEO of the Surat Smart City Development SPV. Under his leadership Surat was awarded by Government of India for showing highest momentum in Smartcity implementation. He is a member of Expert Group on IT and Cyber Security by Ministry of Rural Development, Govt. Of India.

He has made major interventions in health, education and rural development. He believes that technology can be a game changer in India’s development. He has conceived and implemented projects in Digital Village, Smart Village, Rural Startups, Rural Broadband, Smart Cities, Smart Urban Transportation, eHealth and mHealth for Rural and Urban communities.

He has a Masters in Public Policy and Masters in Economics. A bureaucrat by profession he believes that technology is a great enabler of social change. He has been awarded by Election Commission of India (ECI) for Innovative use of Technology in Elections in the Gujarat 2012 elections.

His projects have won major awards that include SKOCH Award of Excellence, CSI-Nihilent Award, Manthan Award, Financial Inclusion Payment Systems award . He has been chosen as District Collector Digital Champion – 2014.He is an avid blogger and a Startup mentor.