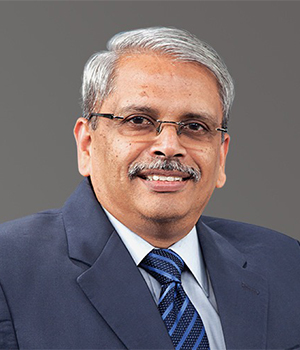 Cofounder of Infosys and Founder of Axilor Ventures

Shri Senapathy “Kris” Gopalakrishnan served as the vice-chairman of Infosys from 2011 to 2014 and the chief executive officer and managing director of Infosys from 2007 to 2011. Kris is one of the co-founders of Infosys. Recognized as a global business and technology thought leader, he was voted the top CEO (IT Services category) in Institutional Investor's inaugural ranking of Asia's Top Executives and selected as one of the winners of the second Asian Corporate Director Recognition Awards by Corporate Governance Asia in 2011. He also was selected to Thinkers 50, an elite list of global business thinkers, in 2009. He was elected president of India's apex industry chamber Confederation of Indian Industry (CII) for 2013-14, and served as one of the co-chairs of the World Economic Forum in Davos in January 2014.

Kris is the Chairman of Axilor Ventures, an early stage startup accelerator and venture fund. Axilor was started in 2015 by Shibulal, Srinath Batni, Tarun Khanna and Kris.

Gopalakrishnan holds Master’s degrees in physics and computer science from the Indian Institute of Technology, Madras. Kris is a Fellow of Indian National Academy of Engineers (INAE) and an Honorary Fellow of Institution of Electronics and Telecommunication Engineers (IETE) of India.